Have you ever thought about why it’s called the Viral Marketing? It sounded strange to me when I heard it for the first time. It made me anxious to know why and what it is. Viral is usually associated with a virus, something that has the characteristics of multiplying under certain atmospheric conditions. If associated with marketing, it gives us a slight hint about viral marketing, i.e. rapid promotions (marketing) similar to the spread of a virus. Further linking it with the online medium, these promotions are through click of a mouse hence referred as the Word of Mouse.

So, viral marketing or viral content is something which is easily circulated or passed on to a degree that whoever gets to read it passes over to the others, which is similar to how a virus gets spread.

In the industry of marketing, a viral promotional activity acts like a treat. Though one cannot really plan or forecast about an activity or the content to go viral all the time. It largely depends upon a number of factors such as :

Here are a couple of services/companies that have benefited from the fact that they went viral :-

Hotmail is one of the best examples that earned benefits from viral marketing. A proof of this can be found at many places over the web, in December 1996 its registered users count was 500,000, and in not more than an year later it grew to a stunning 12,000,000 registered users.

Now what was that something they did to cross the self-set benchmark? Well, they only included a small advert at the footer of each email that was sent via. Hotmail. Though it was later taken over by Microsoft later, it has crossed nearly 30 million registered users. A direct sign-up link was at the end of each mail, this was one of the prominent features that drove people to register for the service faster and more easily. This is one of the most ideal examples of services going viral over the web. The trend of promotion continued and in nearly two and a half years, it crossed another stunning mark of 260 million.

Transport for London – Do The Test

Not many of us really know the significance of this video posted on the You Tube from a marketing perspective. Well it had attracted over 3.7 million views within a span of just three months. It’s for this remarkable benchmark it made it to the stands of top campaigns in the year 2008.

This surely wouldn’t have been only by the means of word of mouth, it was due to various factors that the campaigns went viral. Sharing it was only a matter of a click of mouse, I think this was the key reasons for the campaigns to be so successful.

Let’s take a deeper look at the factors that govern an online campaign to go viral and bring in success for your online business. We can say that there exists two basic types of viral marketing techniques/processes, namely:
• In-the-wild Campaigns
• Controlled Campaigns

I’m sure that not many would have known this before ,so what exactly is it and how can one leverage benefits using the best suitable campaign implementations for your businesses online.

The term would have given you a small hint about how or what it is. Well, in this kind of campaigns the company doesn’t really need to take any efforts. The promoter or the marketer isn’t really aware of the activity and is carried out on the go. A concept of negative branding by means of some relevantly appropriate messages is brought into action with a simple concept, when it’s about publicity there’s nothing as good or bad, at the end you gain an exposure, that’s it. There are companies who’ve made use of this concept and have been able to earn a wider coverage from a bad message that went viral over the web. Though a critical affair, but if handled well, can generate marvelous results.

Take a look at an article published at the financialpost in December `12 : Bad publicity can generate net benefit for lesser-known brands, products

A controlled campaign is something for which you’ve prepared an action plan, where you’ve set certain targets ahead of you and have well defined directions to achieve them in a set period of time. These targets may be in terms of clicks, calls, sales, likes, shares etc. These campaigns require thorough planning and implementation. Budgets can be really high in such campaigns. An authorized marketing personnel needs to execute the campaign and has the full control over the extent to which the campaign can go viral.

So how exactly can you get your campaigns to go viral?

1. Goals : An important aspect of controlled viral marketing campaigns. A marketed needs to have defined set of targets set for making a campaign go viral. Why it’s important?, of-course, it needs to be quantified at the end of the day so you can really analyze if the campaign has offered any returns to your efforts. Being creatively innovative is something that can really benefit you when with getting your campaign to go viral and be shared to the best extent. Of-course, your creativity should be on close lines with the target and what you actually running the campaign for. It should ultimately engage your target audience in someway or the other. If you are able to add in your creativity in a way by which your audiences can relate to it (as we’ve seen in the examples above ) then you are already half way through to achieving your targets. In the end all you need to ask yourself if your material is share-worthy. Each level of extra detail can offer optimum benefits to your intentions.

2. Content : Still the best weapon to dominate the web, and if it’s worth sharing, then nothing like it. You’d find loads of websites and webpages that would tell you more or less the same thing, but what exactly does a shareable content really mean and what are the factors that one must concentrate on ? let’s take a look…..

3. Call To Action Protocol : What’s the use if you aren’t engaging your audience – Engagement rather easy engagement is a key tool that one can leverage for your project to go viral. And what can be anything better that having prominent call-to-action points, so try embedding some really attractive call to action features but ensure that you don’t disturb the theme of the project you are promoting. You can probably make use of the following frequently used call to action phrases:

You can check a good list of 50 odd commonly used call to action phrases here.

Now, it depends on your intentions how you’d like to get them added into your project. May it be in the form of images hyper-linked with the relevant landing pages or be it linked straightaway.

These are basically protocols that humans follow, they are considered as if you are appealing to your audience to take an action. You’d need to be really smart with adding call to action points or zones, if done well, can help you achieve the best returns according to your set targets.

In my experience you don’t really need to have special skills for your project(s) to go viral, it’s only a matter of common sense and a little understanding about your audience.

Understanding cURL : It is a command line tool used for transfer of your file with URL from or to a server, using supported protocols such as (FTP, FTPS, HTTP, HTTPS, SCP, SFTP, TFTP, TELNET, DICT, FILE and LDAP) This command is designed to work if you don’t want user interaction ie to automate unattended … 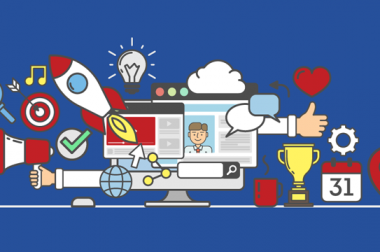 Clever marketers are always swift in finding ways to utilise new technology and devices in their efforts to sell products and promote brands. Today we use NFC/RFID chips embedded into street posters that open up web pages on smartphones and Bluetooth is being used to send deals to customers as they move around a store. …