Tweaker – Twitter tweets spoken to you – No need to read! – Windows 8 app

Tweaker – Twitter tweets spoken to you – No need to read! – Windows 8 app

More apps are being published to the Windows Store ahead for the launch of Windows 8 in October. Windows 8 had recently been released to manufacturers (RTM – Release to Manufacturing), and users on TechNet/MSDN can download and try out the RTM version of Windows 8 but everyone else will need to wait until general availability of Windows 8 which is expected in late October. 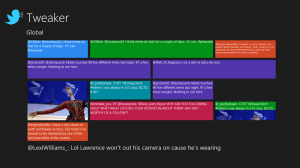 instead of reading them. The app costs $1.99 USD (approximately £1.27 GBP). A description of what the app does by the developer:

Tweaker the Tweet Speaker allows you to passively listen to and watch tweet and photo activity from Twitter. While the “Tweaker” speaks Twitter activity it displays text and image content on lively animated tiles. Tweaker speaks Twitter activity from around the world right to your ears. Trial version is fully functional with reminders to purchase intermingled among the tweets.

We’ve not tested this app yet so we wouldn’t know how good it is – but it’s definitely promising that apps like these are coming into the Windows Store. We just hope there will be enough free apps in the Windows Store come October.

If you are searching for any article on how to disable USB drive then here is the solution for it. Below mentioned method explains how to disable ONLY USB storage devices (flash/Jump/external HD’s) completely without disabling keyboards, mice, etc. The first thing you will do is that you will disable it from the BIOS setting …

Considering the evidences from the past, in the retail sector even the robust players like Home Depot, Target, Sony, Staples and number of banks were victims to high-profile breaches. While we are referring to large organisations or reputed brands, it’s a misconception that small firms will always be safe and that the cyber criminals …